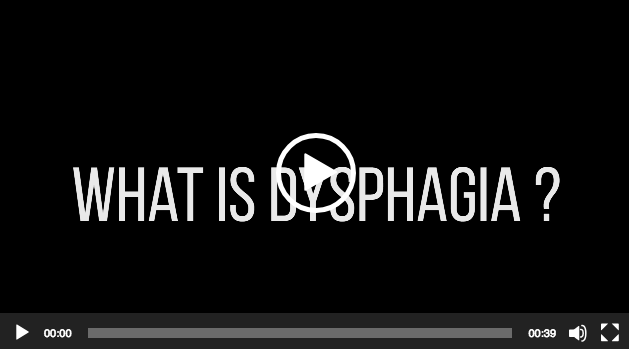 Dysphagia is a discomfort to swallowing or chewing, or the feeling of blocked food, felt in the mouth, throat or pharynx. It is estimated that about 20% of people over the age of 55 suffer from a moderate or severe form of dysphagia.

A person swallows about 1000 times daily to transport food, drinks as well as saliva from mouth to stomach. Effective swallowing allows the body to sufficiently meet its nutritional needs (solid and liquid). This must be done without endangering the airways (trachea, lungs).

The four phases of swallowing 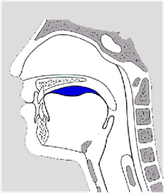 In the first phase, the oral preparatory phase, the food is brought into the mouth, if necessary chewed, mixed with saliva and shaped into a food bolus (portion ready to be swallowed, colored blue in the presentation). The oral preparatory phase is directed in a voluntary way, ie we can keep the food bowl in the mouth or chew it as long as desired. 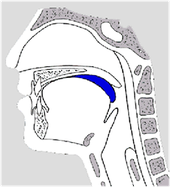 During the second phase, known as the oral phase, the tongue carries the food bowl by pressure against the palate from the front to the back towards the throat (pharynx). As soon as the food bowl reaches the back of the tongue (approximately at the height of the pillars of the palate / over the years between the oral cavity and the epiglottis) the next phase is triggered. 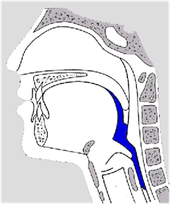 The pharyngeal phase is mainly reflex. Apart from a large amount of motor activity, the course of swallowing is modulated by permanent sensory reactions. That is, the programming of swallowing adapts to external factors such as the size or texture of the food bolus (liquid or solid).

The veil of the palate rises to close the nasal fossae so that no part of the bolus food arrives in the nose. The food bowl progresses through the pharynx downwards towards the esophagus. It is also necessary to avoid that part of the bolus penetrates the airways. This results in elevation of the larynx, a lowering of the epiglottis on the entrance of the larynx, and closure of the ventricular bands and vocal cords. As a result, breathing is interrupted for about one second. At the same time, the entrance of the esophagus opens. 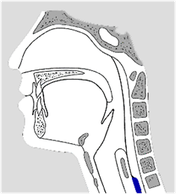 Swallowing disorders are not always easy to spot. They can occur slowly or very suddenly, depending on the underlying disease. Since unrecognized dysphagia can have serious consequences, early detection is very important. Experts make a distinction between direct and indirect symptoms that can be observed during swallowing or during a meal.

Many pathologies can result in dysphagia. A neurological disease is the most frequent cause. Dysphagia may occur as a result of apoplexy or cranio-cerebral trauma. Other neurological diseases such as Parkinson’s disease, multiple sclerosis, amyotrophic lateral sclerosis (ALS) or brain tumors lead to the insidious onset of swallowing disorder. Severe myasthenia gravis, meningitis or certain muscular diseases such as polymyositis or muscular dystrophies can also lead to dysphagia.

Apart from neurological causes, surgery, especially in the neck and cervical vertebra, or a tumor in the area of ​​the mouth, neck or head, can lead to dysphagia. Changes in the spine or esophagus may also occur.

A swallowing disorder often results in frustration or social isolation for those affected. They suffer, because they can no longer eat their favorite food or are disturbed by their constant coughing, eating or drinking in society.

Dysphagia can also have a significant physical impact.